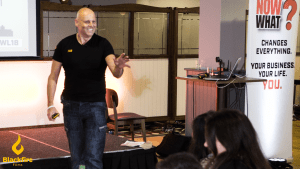 At the end of January 2018 we were filming at Now What Live 18. This is an event run by Brad Burton that features a roster of great speakers and is changing the game on motivational seminars. There’s no “And for just £3999 you can sign up for….”. It’s all good solid advice and support. 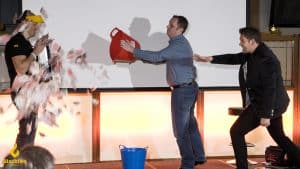 So I was there specifically to film the magician Tom Wright, (www.tommymagic.co.uk) and I can’t share that footage yet, partly because Tom hasn’t decided what to do with it yet, and partly because I’m not showing anyt

hing until he’s seen it and confirmed it doesn’t give away any secrets. 😅

People think it’s just a case of rocking up with a camera and off we go, so here’s a short version of what goes into filming something like this. 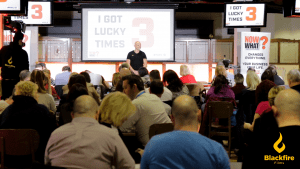 Before even showing up at an event like this you need to know as much detail as you can grab. It’s fine to fly by the seat of your pants when you have to, but knowing things like the timings for the day, room layout and so on can help a lot to make sure you are in the right place at the right time to capture the shots you need. 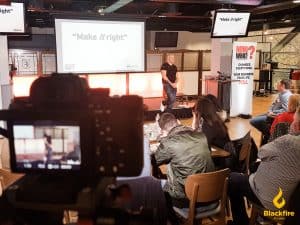 There’s always room for a couple more cameras, but we try and go with a minimum of 3. A back of the room, wide angle for those wide audience shots. A mid angle on a tripod for closer in tracked shots, and a camera on a stabiliser for close ups and audience shots. All DSLR and HD. 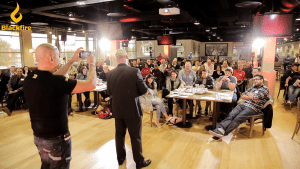 Now technically we were just there to film Tom, but I think it pays with these things to look at the bigger picture. Aston Villa is a dark venue from a filming point of view, and I made sure Tom was properly lit. Normally I’d use softer lighting, but I also know that Brad really wants those lens flare stage lighting shots from behind the speaker so I brought some floods with barn doors and set them up to get “that shot” while still lighting the speakers properly. The barn doors help to stop them dazzling everyone at the front of the audience. 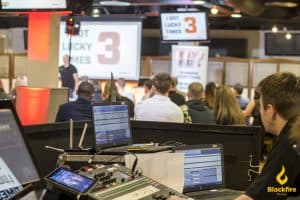 I can take no credit for this. Neil Sayer and Istead AV were there, and from past experience I knew all I had to do was hand them a digital recorder and I’d get a good clean feed from the desk. If you’re running an event they are AV ninjas. If it hadn’t been for them being there we’d have our own solution in place, but finding out in advance who was running the event audio meant we could plan accordingly. 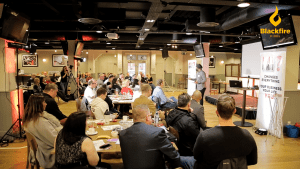 I could go on about lens choices and techno babble, but I hope this gives an insight into what goes into the thought and planning involved in filming an event like this before the record button even gets pressed. We got some great footage of Tom on the day and even shot some extra footage to help out another film company. Collaboration always wins over competition

Previous articleAre you being let down by your Google Listing?