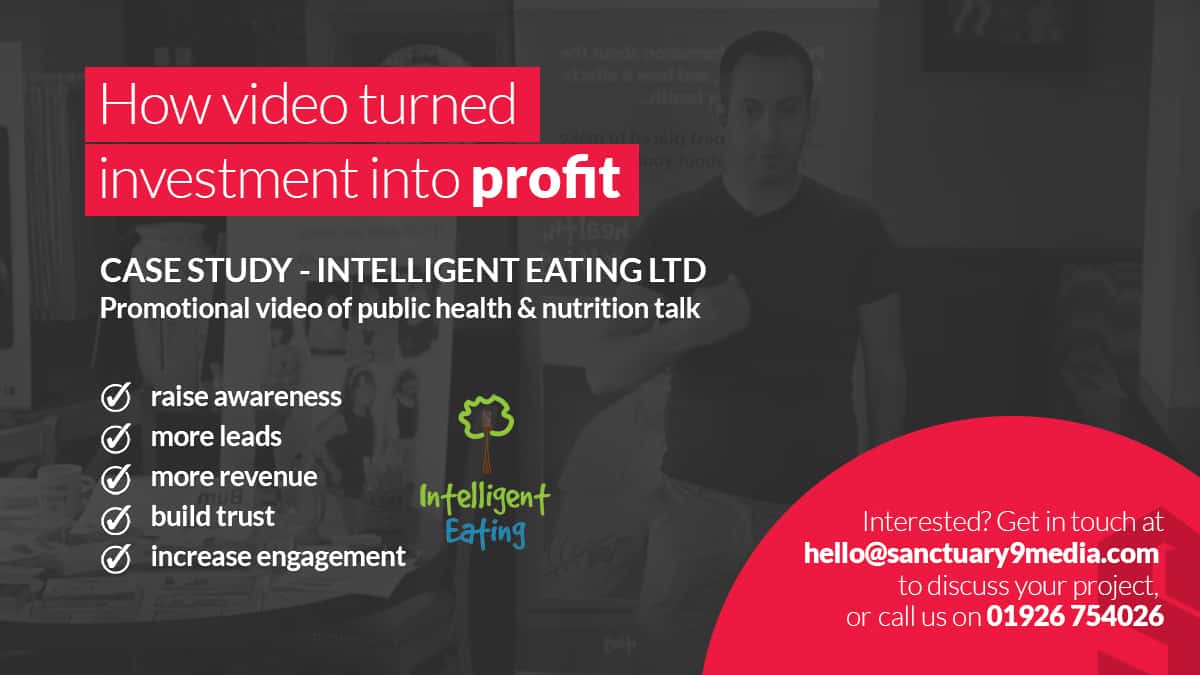 How video turned investment into profit

Adam Stevens, founder of ‘Intelligent Eating‘, invested £750 in a short film made by our production team, and received a 673% return on his investment. Interested to get the same results for you, and your business? Then read on…

Film Adam’s 25 minute talk on nutrition at a business networking event, and create an engaging, dynamic and informative video suitable for social media. His goal was to spread his powerful core message, build upon his credibility and secure further business leads.

Because of the short retention rates on social media channels, we wanted to create an edit around 2 minutes long or less. Facebook’s own statistics also show that a large viewership are likely to watch the video with no sound. For this reason we recommended the use of visually dynamic captions to grab the attention of silent play viewers.

We made use of multiple camera angles to capture any audience reaction and to help keep the viewer engaged. Having additional angles also makes creating short video edits much easier, with cut-away footage hiding any jarring cuts. We also made use of our professional lighting equipment to ensure Adam was well lit and stood out from the busy background.

We used a lapel microphone for Adam to capture high-quality audio, and a separate ambient microphone to capture audience reactions. This ensured that we captured the message as well as the engaging, warm response.

As a direct result of this video Adam was:

•         Approached by a national charity – The Somerville Foundation to speak at their annual conference.

•         Approached by 19 group leaders of a UK wide business networking group to speak.

We’re really pleased with these results and Adam is too.

Notice, the high percentage of viewers who clicked to play; this is extremely high for Facebook. The average is much lower.

Adam was able to use the video to create a ‘custom audience’ which will allow him to target his future advertising to the people who were most engaged with the film. Essentially giving a better return for each pound he spends on Facebook advertising in the future.

With this case study there is a clear demonstration of the power of video to connect you with your clients and create a solid return on investment.

We hit all of Adam’s goals and more. His business saw a direct increase in leads several of which converted quickly into clients. His profile as a public speaker gained great credibility and has already led to high profile engagements such as TEDx and The Somerville Foundation. All in the short term. As an asset, this production will continue to generate interest and leads for many months.

If you’d like to know more about how you could use professionally produced video to generate more leads, raise awareness and increase profit for you business, then simply contact us by email or phone on 01926 754026.